Setting up the node+typescript environment

Typescript and node work well together, we get the simpleness and power of node, but with the comfort of having type checking and intellisense.

However the hardest thing ive found with typescript was setting up that first project. Configuring the build pipeline, knowing how to reference other code and how to handle definition files all add complexity to this otherwise great pairing. Im not saying all this information is not available, its usually quite fragmented and outdated.

So here is my node+typescript setup

My project file structure usually looks something like this. There is no defacto standard in nodeland so personal preference reigns, but here is what we are going for

Install the things we need

If you havent already go install node. Also save yourself some CLI dependancy headaches and go add the following to your path

Create a project file and get your shell/command prompt ready

Pull in our definitions

Typescript is really only useful if the system knows all the metadata about the types we will use. Typings is our access to all of this metadata. Because we are using node we want to let Typescript know all the node global properties are available. So you can run

Originally the typescript compiler (tsc) had a bunch of command line flags that had to be set, which made our build scripts rather complicated, fortunatly there is now a tsconfig.json file you can put in the root directory to define compiler options, this is great! it means the compiler options are source controlled and consistant across different enviornments.

So create a tsconfig.json in the root directory and put this in it. You might need to adjust the version or compiler options to fit, but this will do for our basic needs

Now lets write some source. Nothing fancy. Create a file in src/start.ts with the following

Now in the console run

You should now have a start.js in your dist folder that you can run

and we have done it, built use typescript and node

However, no sane developer will be running tsc on the command line every time they make a change, so lets automate this a bit. We could use Grunt or Gulp but my preference is to do our builds in a few simple npm script commands (even on larger projects I tend to opt for npm scripts over Grunt Gulp as well).

Inside your package.json there should be a scripts section, our npm init probably already created a “test” stub, we are going to add a few more

These scripts are basically aliases to the shell commands. This means we can now build our application by running (This is what your build servers should be running)

But for development it means we can run

This will start a long running process that will monitor all changes in your .ts files and build whenever they change, it will also show the errors on the console whenever you mess up.

The reason we put these into our package.json is that when our built becomes more compliated we can just update our source controlled package.json file rather than updating any server that is using it.

I can only speak for WebStorm (although there is supposedly good support in visual studio and atom,

My ideal IDE would allow me to run npm build:watch then it would interpret the output as it happens and highlight the errors for me. Unfortunatly WebStorm does not do this, what it does do is runs its own tsc command in the background independant of my npm scripts, it will then highlight errors based on its own compilation. When using WebStorm you will not need to ever run npm run build:watch

This is very easy to get running (File->Settings) and for the most part it is well supported. 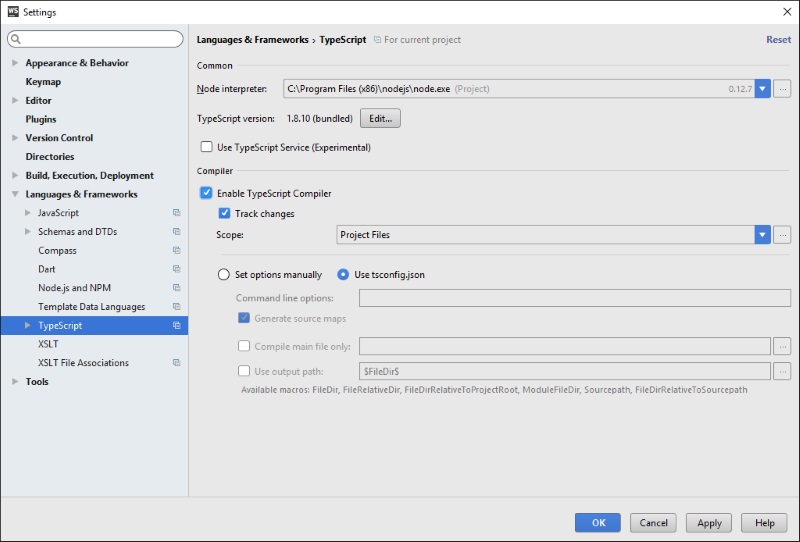 We got our basic build chain going above, we can now add and edit typescript files and change are automatically transpiled and put in our dist directory.

The last thing is adding new dependancies and their associated type definitions. So we will expand our simple app to use express.

we will use node to install express

And we will update our start.ts to be an express webserver

At this point you will probably recieve some typescript errors along the lines of Cannot find module 'express' this is because typescript has no idea what is in this module. Counter intuitively the code will still run as node knows how to resolve express but we lose all the benefits of typescript

So we need to let typescript know that ‘express’ exists and give it all the metadata it needs to work with express. This is done through Typings, run the command

There is a lot of flags on that command, so a quick breakdown of what they all mean.

Personally im not a fan of Typings, Its commands are long winded for the common (albeit legacy) case. Its documenation does little to advice on its recommended usage and it has a very generic name so it is difficult to google help. Unfortunatly its the tool we are stuck with, at least until typescript definitions bundled alongside node modules become standard.

But rants aside, our typescript now knows what express is everything compiles and runs. Just remember when you add new libraries you need to install both the library (via npm install) and the defintions (via typings install).

Starting up a project

« npm install --global is not the way String to Expression Part 1: The Tokenizer »